The VT102 is a variant of the VT100 that includes some of the common options but lacks the expansion slot. The label indicates this unit was made in 1983. 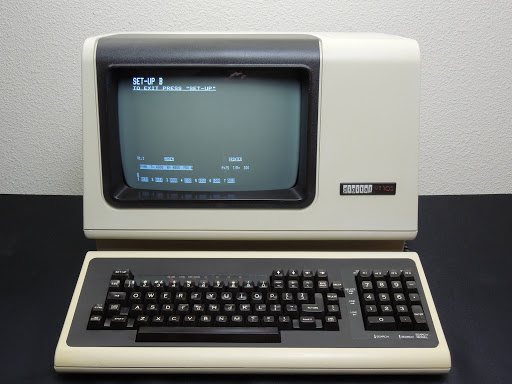 It has an 80 column by 25 line display which is switchable to 132 columns.  The baud rate is selectable from 50 to 19200. In practice I've found baud rates above 4800 to be unreliable when data is coming in steady with no inter-character delay.

On the VT102, the indicator lights L1 and L2 indicate CTS and DSR. The bottom of the keyboard has a cheat sheet showing configuration options on the setup screen. The connector is a 1/4" phone plug. 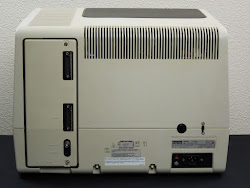 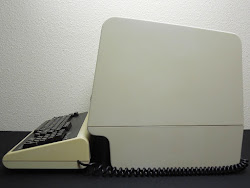 The rear includes 1/4" phone jack for the keyboard, a BNC connector for external video output, the serial port and a serial printer port are DB25 male, an IEC C14 power socket, fuse holder and power switch.

Photos of the inside 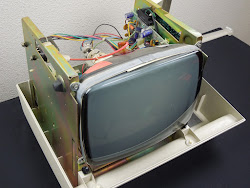 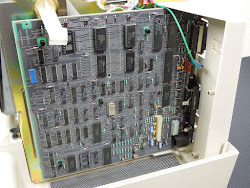 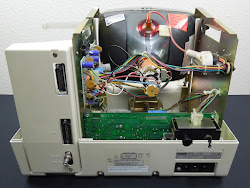 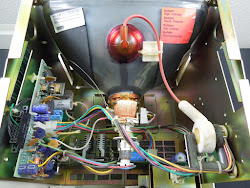 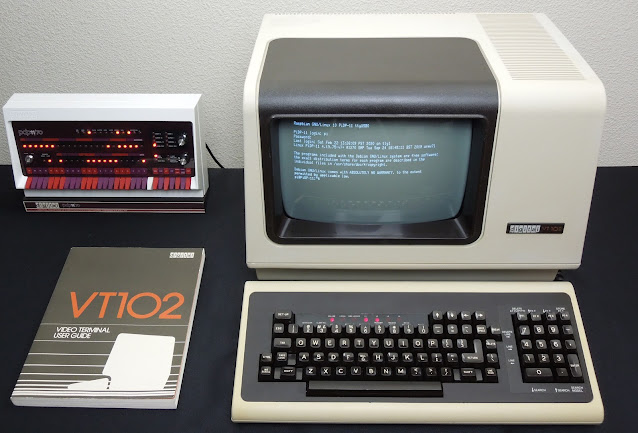 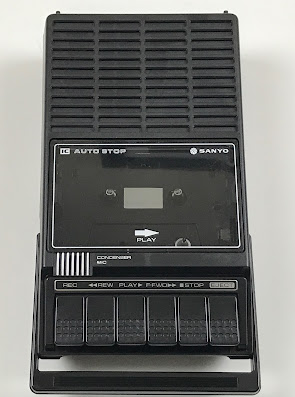 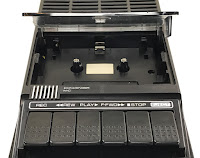 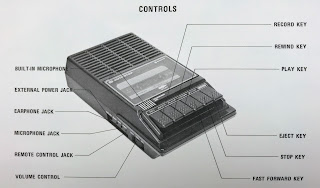 This is the cassette tape recorder Chuck Peddle used in the original Commodore PET prototype. 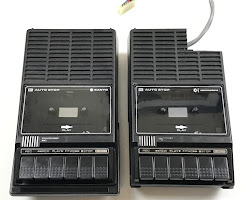 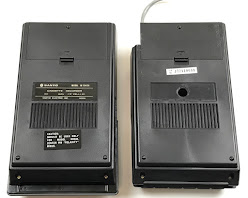 John Feagans wrote that they bought a pallet of tape drives from a local electronics store in Palo Alto. These were then modified at the Commodore factory in Santa Clara. 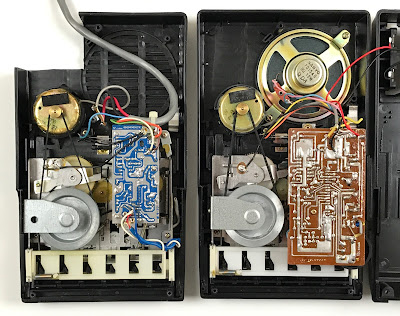 The drives were modified by removing the speaker and replacing the circuit board. The corner was sawed off to prevent interference with the power supply inside the PET.

Commodore continued to use the Sanyo drives for the initial production run in October of 1977, but switched to a custom built OEM drive after October.

My oldest computer.
This is an early unit from 1977 with the Sanyo type cassette drive. SN# 0010165, dated 10/24/77 by the testing sticker on the main board. This is one of the first 100 units produced in Oct ‘77. Everything is factory original except for one ram chip that was replaced during repairs. 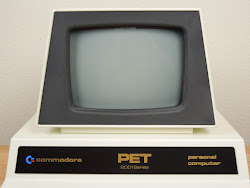 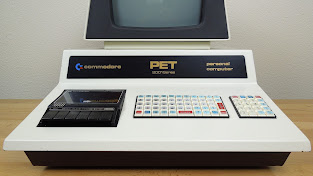 The Sanyo tape recorder is the same one used in the original wooden prototype. According to John Feagans, one of the Commodore engineers who created the original PET, the Sanyo recorders were purchased from a local retail store in Palo Alto and modified in-house. They were only used in pre-production units and in the first 100 production run in the Fall of 1977. 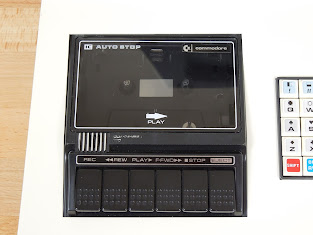 Most people think that the earliest units had a blue screen bezel, but the first 100 were black. These were in a way, pre-production units. Commodore was still working out the production and testing processes in Santa Clara in October. They didn’t have the OEM cassette drive yet, so they continued using the retail Sanyo drive that was used in pre-production units.
Full scale production didn’t start until December using the OEM Cassette drive and the blue monitor bezel.
The opening in the case for the cassette drive and the mounting hardware are different for the OEM cassette, so the drives are not interchangeable.

The case badge is unusual. It is made of metal and is raised off the surface on standoffs. This type of case badge was only used thru the end of '77. By Jan '78 they were using adhesive labels. 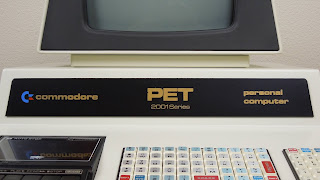 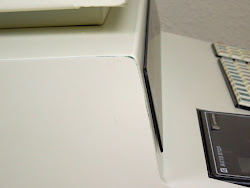 The serial number sequence started with 001 for North America, so this serial number 0010165 is  #165. It's worth noting that Commodore didn't always use serial number labels in sequence and sometimes skipped blocks of numbers. The metal chassis was made in Toronto by the Commodore factory that made filing cabinets. The logic boards and final assembly was done in Santa Clara, California. 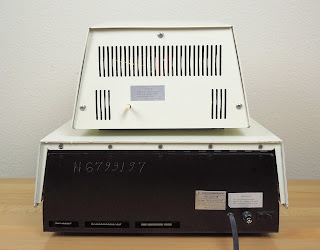 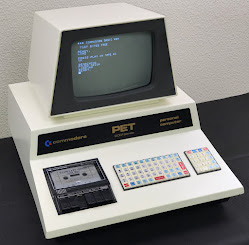 The mounting hardware for the Sanyo drive can be seen in the photo below. There is no front bracket like the one used on the OEM drive. 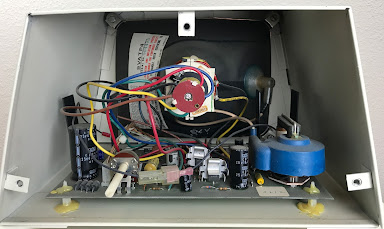 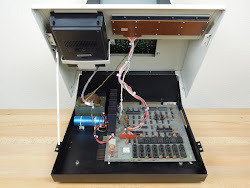 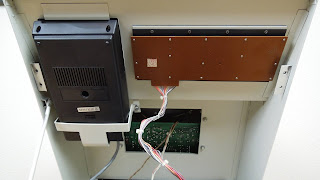 This has the original version 1.0 ROMs, so it's not capable of accessing IEEE floppy disk drives. The logic board is assy 320081, Part No. 320080 Rev B. It is an early version of the board with no solder mask on the top side. The ROM chips are Synertek, RAM is MPS 6550 1Kx4.
The hand written number on the board near the front-left (0170) is a production serial number to track boards during testing and re-work. A hand written number like this can be found in this area on almost all 2001-8 boards, especially the early ones from late ‘77 thru mid ‘78. 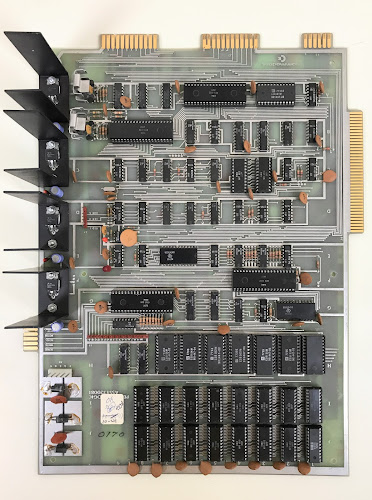 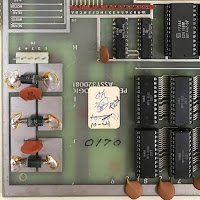 The sticker with the date and initials is from production testing and indicate the date it passed testing and the technician’s initials who did the testing. In this case the board passed initial testing on 20 Oct but probably failed during burn-in and was repaired and re-tested on the 24th.  A sticker like this can be found on many very early boards, though it may have been removed or fallen off most.

Email ThisBlogThis!Share to TwitterShare to FacebookShare to Pinterest
Labels: 1977, 2001-8, 320080, 320081, chicklet keyboard, commodore, datasette, pet, retro computing, vintage computer
Newer Posts Home
Subscribe to: Posts (Atom)
Unless otherwise noted, all photos and other content are my own, all copyrights reserved.